House Democrats will caucus today, ahead of next week's session, which we are hearing will be Thursday, September 14. There has been no GOP counter budget released. Yesterday, the CT Mirror reported that Governor Malloy has offered a compromise when it comes to towns and cities when it comes to covering the costs of teacher pensions. He also seems more open to entertaining revenue options. To read more, click HERE.

On Labor Day, the CT Mirror published an article on the impact the closure of Care4Kids is having on child care providers. Enrollment is down 33% (7,500) from last July, and that is forcing providers to make difficult decisions. The CT Mirror contacted Georgia Goldburn, who explained what options she's facing at her center. To read the full article, click HERE. 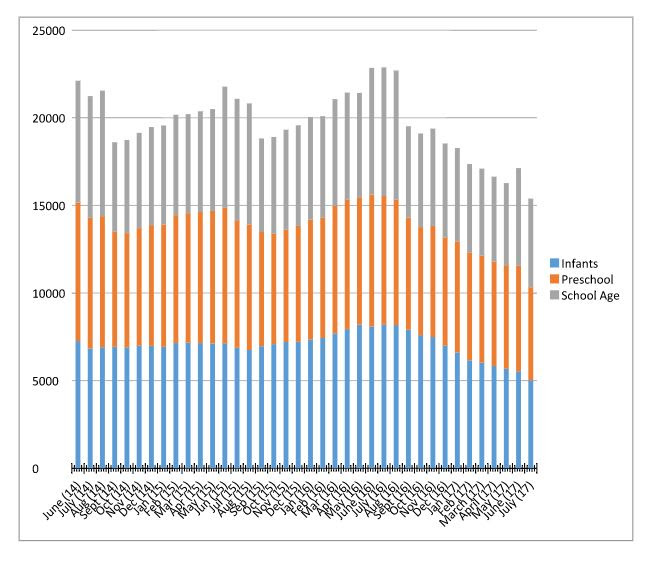 Following up on the Care4Kids info, the Alliance has created a chart to show the highs and lows in enrollment over the past few years. As you can see from the chart, June, July, and August are often the highest peaks for enrollment, which include summer camps. As you look at 2017, those highs are not there anymore.

Are you on Twitter? Help Make Some Noise About CHIP

Congress is back in session and we know their minds will be on raising the debt ceiling, emergency aid for Hurricane Harvey victims, and now, potentially another hurricane heading toward Florida. We need to make sure they understand the importance of re-authorizing CHIP, the Children's Health Insurance Program, that covers 17,000 children under the age of 19 in Connecticut.  Many states, including Connecticut, will run out of money to fund the program, should Congress not reauthorize the program. It will expire at the end of September. As a refresher, the CT Mirror ran an article that we shared in last week's memo - it can be found HERE.  If you're on Twitter, you can help make some noise for the program. You can re-tweet some of the posts we've re-tweeted (our handle is @CTECA) or search hashtags such as #extendchip or #chipworks for other potential re-tweets. If you have knowledge of the benefit of the program, you can tweet at our Congressional representatives - @repjohnlarson, @repjoecourtney, @jahimes, @rosadelauro @repesty and senators @chrismurphyct and @senblumenthal. They are supporters, but it doesn't hurt to keep it top-of-mind with them as well.

The National Women's Law Center (NWLC) and ZERO TO THREE will host a Facebook Live Chat on Friday, September 8, 1 p.m., for parents who want to talk about the difficulties of finding quality child care on a budget. The FB Live Chat can be found on either page, starting at 1 p.m. The topic of infants and toddlers has been one of great interest to the Alliance.

Despite What You've Heard, ACA and Medicaid are Still at Risk

In this recent op-ed by Ellen Andrews of the CT Health Policy Project, she notes that people are probably feeling the fatigue from the fight, but the fight will continue, as plans to derail ACA or cut Medicaid could come down the road. To read the full op-ed on CT NewsJunkie, click HERE.

Working with school programs in Enfield and Manchester, Hartford Foundation for Public Giving and LEGO teamed up to help support a playful learning/purposeful play initiative. Watch the video HERE

Finally, effective September 5, our Executive Director Merrill Gay is on a leave of absence, as he pursues a run for Mayor of New Britain. If you need anything, Jessica and Samantha are at your service!  Contact us at [email protected] or [email protected].