The September Care4Kids numbers came out late last week and the numbers have plunged in children served. We anticipated a drop, as children went off to kindergarten and providers couldn't replace them with another child on Care4Kids, but Care4Kids served only 11,043 children in September (compared to 19,517 last September and 14,955 in August 2017 - the last month reported). That's 3,912 less children from last month and it's across the board, not just the preschoolers moving to kindergarten. We are continuing to do analysis on the information, but these numbers are alarming. The Excel spreadsheet can be found HERE.

We are still without a budget, with legislators leaders meeting to plug away at a bi-partisan deal. Rank-and-file legislators have been told to hold the week of October 21open for a possible vote. But on Monday, the governor issued a "bare bones" budget proposal of his own (OEC can be found on page 12). Within this proposal, the governor cuts funding for Even Start and drastically cuts funding for 2-Gen. Overall, it's an $850,000 cut to the OEC. The governor has also told legislative leaders that he will veto any budget they propose that changes the agreement with labor unions. CT Mirror and CT NewsJunkie have more.

There are proposed bills moving through the process, but we are still 17 days out without re-authorization of either bill. To help advocate for these programs, please use your voice on social media. Tweet at your Members of Congress (MOC) and tell them why these programs are so important! Senator Blumenthal - @SenBlumenthalSenator Murphy - @ChrisMurphyCT Rep. John Larson - @RepJohnLarsonRep. Joe Courtney - @RepJoeCourtneyRep. Rosa DeLauro - @rosedelauroRep. Jim Himes - @jahimesRep. Elizabeth Esty - @repestyYou can also search for posts by @homevisiting, @firstfiveyears, @NatlPAT, and @CTECA. You don't have to come up with your own tweets - feel free to re-tweet if there's something that makes sense for you to share. You can tag your MOCs before you re-tweet.There's continuing activity under the hashtags: #ExtendCHIP #ExtendMIECHV #KeepKidsCovered #CHIP #MIECHVPBS Newshour addressed the CHIP funding issue, reporting that Connecticut is one of 27 states expected to run out of money between January and March of 2018.

Attention if you live or work in New Haven! CERCLE will host its October Community Forum, with featured speaker, OEC Commissioner David Wilkinson, on Tuesday, October 24, 6 p.m. at All Our Kin, 414A Chapel Street, New Haven. Space is limited, so please RSVP if you plan to attend, by calling 203-865-4673 or by email at [email protected].

The CT Office of Early Childhood, Family Support Services Division, has released its town-by-town data for FY17 Birth to Three referrals and children served, as well as calendar year provisional birth data from CT Department of Public Health, so you may place the Birth to Three fiscal year numbers in context of the larger population. The FY17 data can be found HERE (this is an Excel spreadsheet). Earlier data can be found HERE. Please note, (1) FY17 includes July 1, 2016 through June 30, 2017, (2) The number of children served by Birth to Three is an accumulated total of infants and toddlers born across calendar years, so is sometimes larger than the number of referrals made in a single fiscal year for the same town, and (3) in order to preserve confidentiality of children and families, any town with 5 or fewer referrals or children served is redacted with a “<5”.

CTCIP (Children With Incarcerated Parents Initiative) is seeking partnerships with local libraries to join its annual fall campaign, "See Us, Support Us," to build awareness and empathy around the experience of children whose family members have been incarcerated. The CT Early Childhood Alliance and CT Office of Early Childhood are helping support this campaign. 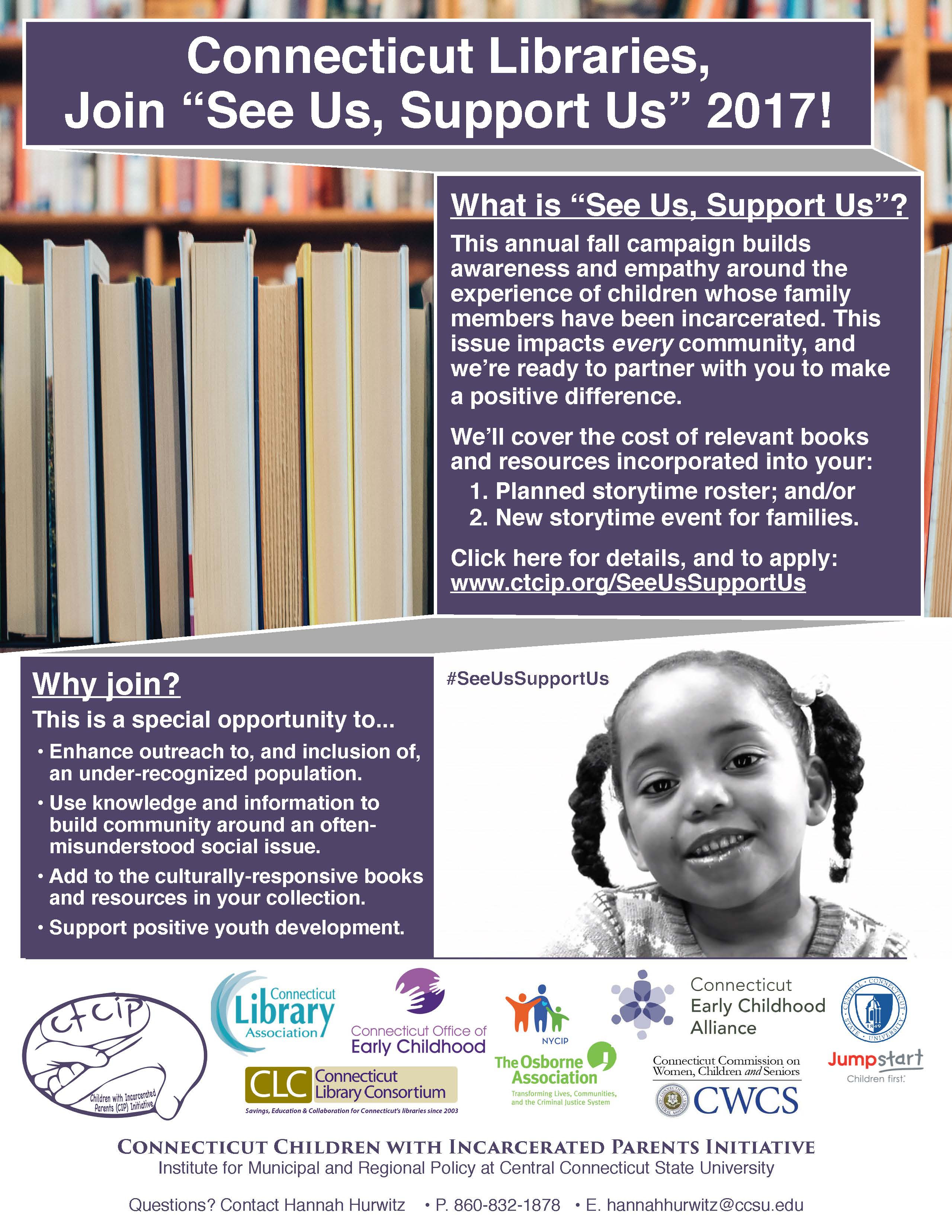 The CT Campaign for Paid Family Leave will host a screening of the Ky Dickens film, "Zero Weeks," on Friday, November 3, 7 p.m. to 9 p.m., at the Alumni Lounge at the University of New Haven, 300 Boston Post Road, West Haven. Students and seniors are free, but a $10 donation is suggested to benefit the CT Campaign for Paid Family Leave. ZERO WEEKS explores America's paid leave crisis. Following workers who are forced to choose between keeping their job or being with a new baby, beating cancer, or tending to an aging parent, the film makes an economic, medical, business and social case for paid family leave. RSVP HERE. If you cannot attend on November 3, there will be other screenings around the state over the next few months. To find out where, click HERE(more screenings will be added). And, if you click on the screenshot, you can watch the "Zero Weeks" trailers via YouTube. 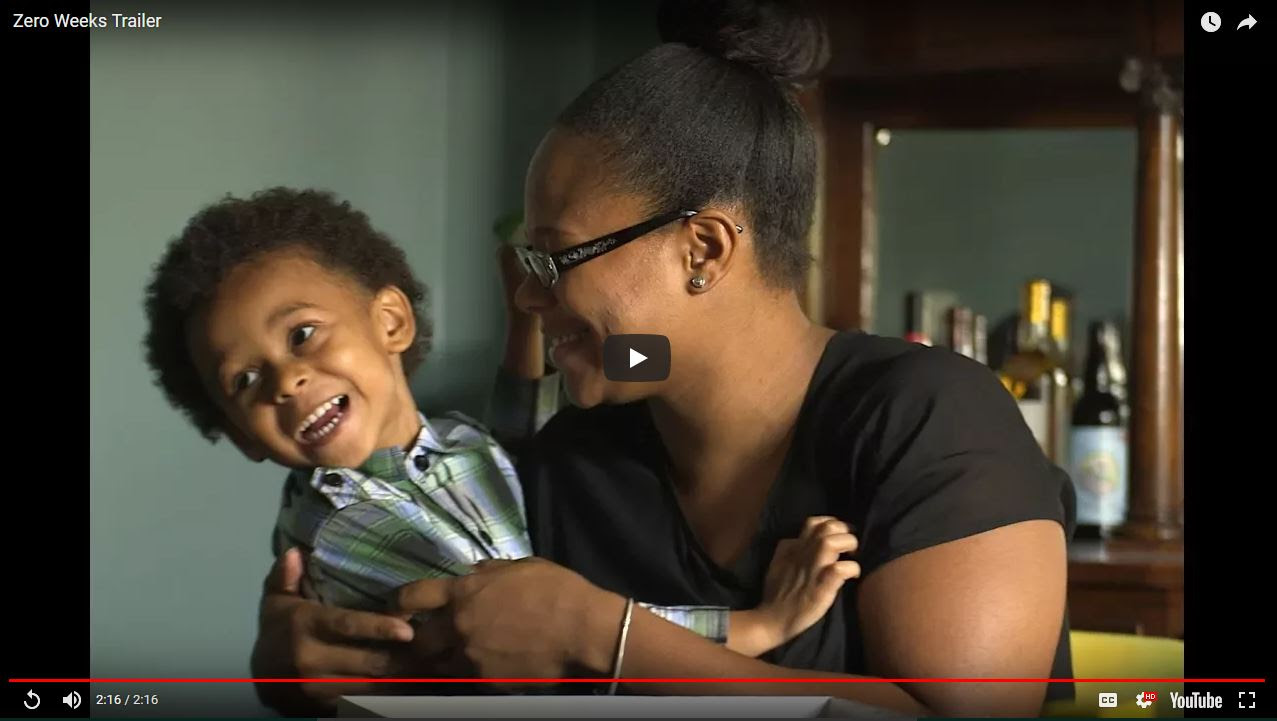