The CT Early Childhood Alliance has data available on Hartford and New Haven region. If you have a meeting you would like the data presented at, please contact Samantha Dynowski to set it up. Click on our graphic to bring you to the data page: 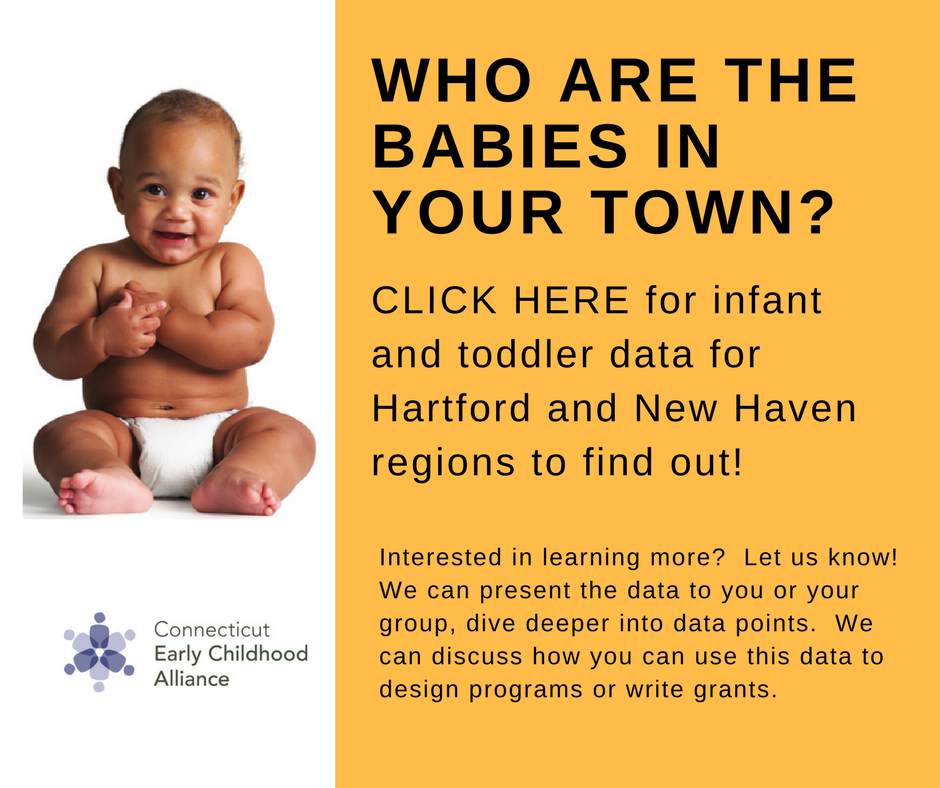 The Center for Children and Families blogs about a new study that provides more evidence that children’s health and well-being improve when parents have health coverage. Click HERE for more.

We're only just beginning to understand what is in the tax bill that was passed recently in the US Senate. We know it will blow more than a trillion dollar hole in the federal deficit and will not pay for itself, according to the Joint Committee on Taxation. We know it will mean tax increases for Connecticut residents who are low- and moderate-income, by way of deduction losses. This is just the Senate version, which now goes to conference with the bill passed in the House to reconcile differences. CNBC has put a chart together to help explain the differences between the two bills. Then it needs to pass in both chambers.

The government is still in danger of a shutdown if there is no year-end spending package in place (they signed a bill to continue funding the government until December 22), and lawmakers keep kicking Children's Health Insurance Plan (CHIP) down the road, while states are running out of money to fund it. Nine million children across the country are in danger of losing their healthcare. The newest claim from Senator Orrin Hatch, who helped craft CHIP legislation 20 years ago, is there isn't enough money to fund it. In Connecticut, if a reauthorization doesn't happen soon, letters will start going out by the end of the month to the parents of 17,000 children and teens, warning them their coverage could end early next year. The Hartford Courant has MORE.  The Intercept has a very detailed article regarding CHIP, what the indecision is doing to other states, and what the future holds if a decision isn't made soon.

State Update: Budget Already out of Balance, Question if General Assembly Will Meet Before Holidays

The fiscal news continues to look bleak in Connecticut. Comptroller Kevin Lembo recently announced that the state was looking at a $207.8 million year-end deficit. With that number being more than 1% of the general fund, which requires the governor to draft a deficit mitigation plan for the legislature to adopt. But the question now is, will the legislature convene before the end of the year to hold a special session on the deficit? The answer depends on who you ask. To read more about the current situation, click to the CTNewsJunkie story and the CT Mirror story.

The National Women's Law Center and CLASP will be holding a conference call on Wednesday, December 13, at 12:30 p.m., to talk about the opportunity to make a major case for increasing child care funding. The time is now to advocate for doubling the discretionary funds for Child Care Development Block Grant in the final omnibus spending bill. Last week, Democratic leadership outlined its priorities for the 2018 appropriations bill and requested a $2.9 billion increase for CCDBG. This increase would ensure that states have the resources they need to implement the provisions in the 2014 bi-partisan reauthorization of CCDBG that will bolster the quality and safety of child care and help families more easily access help in paying for child care. The new funds would also allow nearly 230,000 additional children to receive child care assistance giving low-income parents financial help to afford high-quality child care so they can succeed at work; help to fund salaries needed to attract and retain well-qualified child care professionals; and give children the early learning experiences they need to succeed in school and in life and to become productive members of the future workforce. On the conference call, NWLC and CLASP will explain the situation more in-depth and outline ways you can become involved to push for this significant increase. The call-in number is 1-877-273-4202. The PIN is 733-934-065.

There will be a rally on Thursday, December 14, at 3 p.m. Room 2C of the Legislative Office Building in Hartford, to urge legislators to repeal the Medicaid cuts including the Medicaid Savings program and HUSKY A. The attached flier has more information.

The Homevisiting Coalition will host its second Twitter Chat on Friday, December 15, from 1 p.m. to 2 p.m. EST.

This week’s chat will be feature expert panelists below and will be moderated by the Home Visiting Coalition team via @HomeVisiting.

To get as much traction as possible, we invite all our participants and supporters in the field to join the conversation and chime in with your own thoughts, concerns and ideas.

How to Join
@HomeVisiting will moderate and ask questions about MIECHV spaced out over the course of one hour to the panelists listed above. Please feel free to chime in with your own thoughts and ideas using the hashtag #RenewMIECHV!

To maximize participation, be sure you are following each panelist on twitter ahead of the chat.

Make sure your twitter handle is public (at least for the duration of the chat and until we complete the Storify).